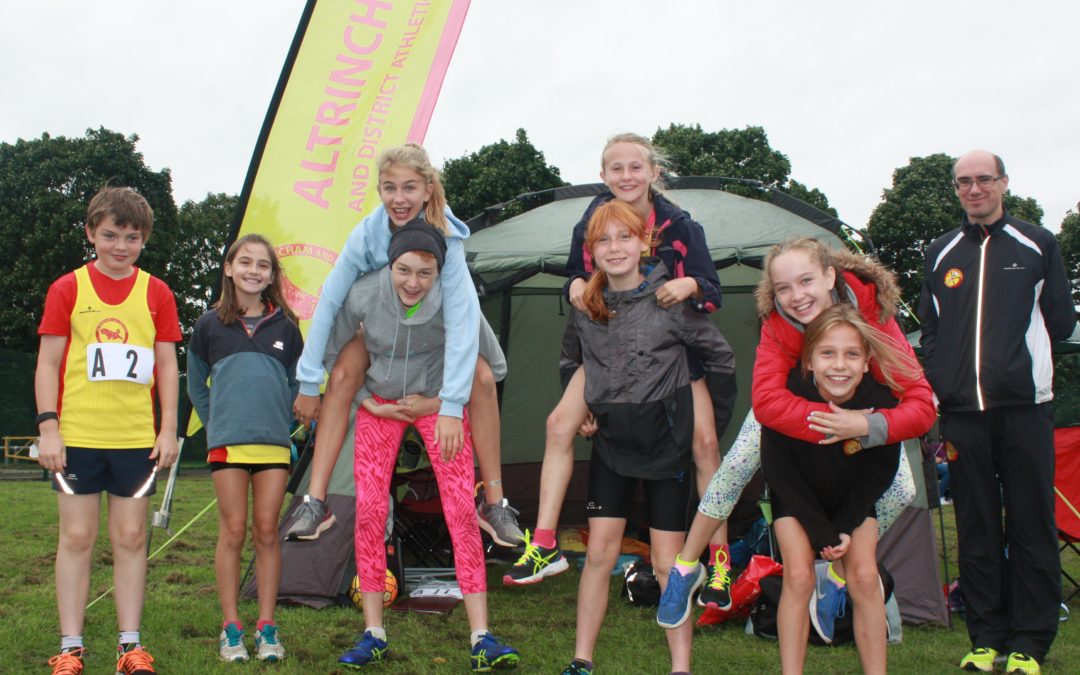 We waved bye bye to the 2017 track & field season with our final fixture on the glorious blue track of Warrington.  The meeting saw us lock horns with hosts Halton & Frodsham, Trafford, Crewe & Nantwich, Stockport and Bury.

In total we had 18 athletes compete including 3 debutants, Joud Al Sharief for the U11 girls with James & Ben Westwood in the U13 and U11 boys respectively.

The U11 girls was particularly well attended with 7 girls taking part.  The 150m races were covered by our quartet of Charlotte Stansfield, Hannah Myers, Ella Farquhar and Lucy Pearce.  Joud Al Sharief joined all of these for the long jump.  For the 600m we had six with Charlotte, Hannah, Lucy and Joud all running with the addition of Jessica Forrest and our highest placed finisher, the rapidly improving Eleanor Nicholson.  We also managed a relay team with Jess, Charlotte, Hannah and Eleanor making up our quartet.  Strangely, this was a completely different four to our relay team in the last meeting!

For the U11 boys we had Dominic Gibson, Ben Westwood and Dylan Hanrahan represent us in the 150m.  They all ran the 600m along with Josh Mulholland-Wells, who again impressed as our first runner home.  Dominic and Dylan also took part in the long jump, benefitting from being able to get their jumps in early by the lack of a relay team.

In the U13 boys, James Westwood was our sole representative by doing the 100m, unfortunately picking up an injury in the process so hopefully he is OK.

In the U13 girls our sole competitor was Aisling McHale who did high jump before again impressing in the 1200m.

In the U15 girls we were well represented with Tess Pearce and Emma Simpson taking part in the sprints and field events before we got to watch Millie Pearce win her 1500m race convincingly.

Finally, veterans Barry Chapman and Andrew Whittingham were also in action in the long jump and 3000m respectively.

I’d like to thank everyone that turned up and hope that they enjoyed it.  Whilst we would obviously like to fill more of the gaps in our team, over the course of the track & field season we have seen a big increase in the numbers taking part this year and hopefully we will continue to develop in the right direction.