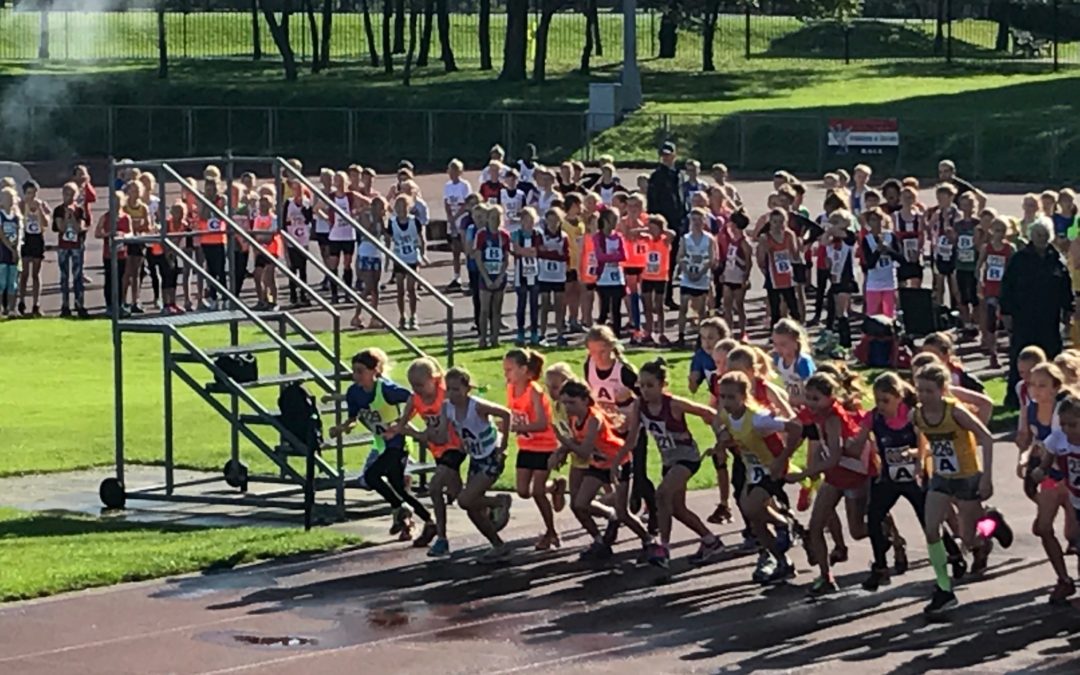 The club hasn’t had a much of a presence at this event in previous years, especially in the junior section, so it is quite astonishing that we managed to complete 7 full teams at Blackpool.  This is partly down to the introduction of the U11 section of the event for the first time last year, but also the larger and higher quality pool of athletes that we have to invite to these events.

The first team to run was the U11 boys.  This very nearly didn’t happen.  From originally having 7 athletes available, this whittled it’s way down to 3 and then owing to illness, down to 2 on the actual morning.  A desperate phone call and text message were responded to positively and Dominic Gibson stepped in at the last minute.  Henry Bellingham was impressive on the first leg with Harry Waddell and Dominic Gibson running well to finish 18th out of 20 teams.  While this may not sound that impressive, it’s important to remember that this is a high quality event and you don’t get many runners here who are just looking for a fun run.  The boys were rewarded for their efforts by finishing 3rd Greater Manchester team, a mere 15 seconds ahead of 4th placed Horwich.  As a result, they joined the senior men’s team in taking home county medals. 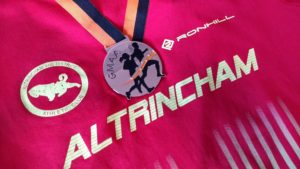 Next up, starting a few minutes after the boys, were the U11 girls.  We had three teams in this age category.  I knew we had a strong A team, but wondered whether I’d stretched things a little far in taking 9 girls to the event.  I needn’t have worried.  Our A team made up of Holly Newton, Jessica Forrest and Sara Herceg-Millington were excellent finishing in an impressive 6th place out of 30 teams.  This is our highest junior finish in this event to date.  The B team were also very impressive sneaking into the top half in 15th.  Eleanor Nicholson produced a stunning first leg, followed by a great run from Charlotte Stansfield.  Thea Prattley ran well considering she was feeling under the weather and she lost about 24 seconds owing to a mix-up with the officials.  Our C team made it into the top 20 with a brilliant 19th place.  Carys Bucknall, Hannah Myers and Ella Farquhar’s efforts meant that Altrincham were the first to have three U9 girls teams home.  A great show of our strength in depth in this area.  Unfortunately, for the A team, their 6th place was only good enough for 5th in the loaded Greater Manchester section of this age category.

Another point of interest is the number of teams taking part in the U11 event in its second year.  The boys were up from 12 to 20 and the girls from 20 to 30.  Clearly there is interest in this sort of event for U11s.

The next race was the U13 girls.  We had two teams in this event with selection order for the Northerns at Sportcity also at stake.  This turned into a head-to-head between our two first leg runners Esme Pearson and Verity Charnley.  A team runner Esme came into the stadium first, but the determination B team runner Verity Charnley showed in overhauling her was awe-inspiring.  Verity finished ahead by just a few metres.  The A team managed to get ahead again with Grace Adams and fastest U13 girl of the day, Aisling McHale bringing the girls home for a top half finish of 18th out of 38.  This category was the only one we’ve previously had a full junior team take part in, so I was hoping they’d beat that performance.  In 2014, the girls finished 20th out of 22 teams.  So the class of 2017 succeeded in improving on that, despite the increase in the number of teams from 22 to 38.  More teams shows the increasing popularity of this event.  The B team was completed by Eva Bucknall and Orla Flynn to finish in 30th.  All six girls are in the lower age bracket of the U13s, so hopefully they will look at this as an event that they’d like to train for and come back next year to try to do even better. 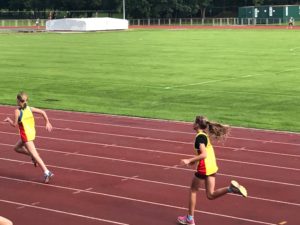 The final full junior team was the U13 boys.  The team of Alexander Grierson, Ben Lomas and Angus Morris finished 29th out of 34.  This was their first taste of a relay event like this, let’s hope it’s the first of many!

We also had Thomas Pavey running for the U15 boys in an incomplete team and a mention should be made of Harry Sinclair.  Harry still trains at the track, but owing to our lack of U17 boys is now competing for Trafford so that he can go to the team events.  His team finished 7th overall and 1st in Greater Manchester.

Aside from the juniors, we had a senior ladies team including a guest appearance from Altrincham’s former national champion, Jayne Knowles (check out her daughter Harriet’s Power of 10 bio!) who was making a special appearance as part of the retirement celebrations of her former coach, Don Nichol.

We had five senior mens’ teams, with the A team finishing 6th overall and 2nd Greater Manchester.  Our runner Mohammed Abu-Rezeq was fastest leg of the day.  If you want to know how I ran, I was skulking around in the D team.

Finally, if we add the seniors to the juniors we had 45 athletes represent Altrincham at Blackpool.  If we’ve beaten that before in any event, it was a long time ago.  The main reason for the large senior attendance was as a thank you to Don Nichol.  The guy is a legend here and his legacy lives on in the coaching staff with his son, Phil Nichol and the influence and support he has given to so many at the club.