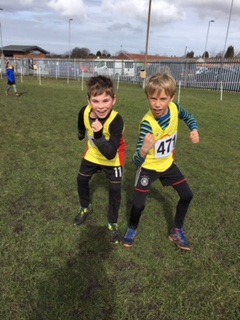 It’s always exciting to see how new athletes get on when they take part in a club competition for the first time.  Every great athlete needs to start somewhere and many will be able to point to a modest first performance as where it all began.  Club competition is very limited for U9s, but with many moving up to the U11 category in track & field this year, the annual XC event held by East Cheshire Harriers has become an ideal introduction.  In addition to the U9s this event also contains an U11 event.  While this is more low key than the Manchester League, competition is still fierce, especially among the veterans of the circuit!

First race up was the U9 girls where we had a modest four entrants after a couple of withdrawals through injury and illness.  They all performed brilliantly, taking home 2nd place in the team prize to come home with some nice medals.  Extremely impressive was Izzy Jones finishing in an outstanding 5th place.  Definitely one to keep an eye on!  Also running brilliantly to sneak into the top 10 was Tess Jarvis with Hannah Stansfield the third counter in 12th.  I hope the Stansfield household has room for all these medals their daughters are picking up!  Final finisher was Amelie Greaves in 20th, showing great promise after being at the club for only a few weeks. 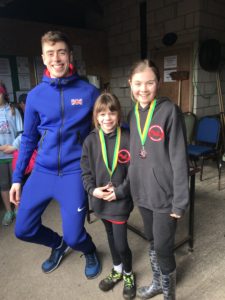 The proud U9 girls show off their medals.

We had a bumper crowd in the U9 boys, making up nearly a quarter of the field with 11 boys finishing the course.  First finisher was Yannick Hubner, just outside the individual medals in 4th.  Thankfully he still went home with a medal for 2nd team thanks to stunning performances from the other Altrincham boys.  Also making the top 10 in 6th place was the impressive Jonah Pearce.  Now there’s a surname we’ll all recognise!  3rd medallist was Toby Dunn-Barrett in 11th, effectively winning the Altrincham competition to sneak into the last medal place.  Next up was Ged Quinn in 13th, pipping Lucas Brennan in 14th.  In 18th was Neil Randev with Hamish Flowerdew also sneaking in to the top 20.  Hamish led a group of 3 in a row, with Eoin McHale 21st and Joseph Lang in 22nd.  Eoin and Joseph have a bit of a rivalry – good to see this competitive spirit!  The final two finishers were Alexander Edwards in 32nd and Daniel Moores in 38th.  The enthusiasm of this batch of boys is infectious and they’re a real joy to train.  There’s clearly the potential for a really good boys team to emerge from this grouping that could even eclipse the recent achievements of our junior girls. 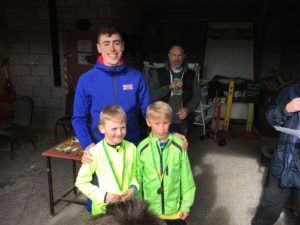 Altrincham boys with medals? The world is changing!

In the U11 girls we had several taking part that have already shown their mettle in other competitions this year.  My gold star of the day goes to Thea Prattley who was first girl home in 13th.  She gets the award because she has been a regular participant in events over the last year and I think this was her best performance to date.  Thea is a delight to train and I really think she could be one to watch in the future.  Second finisher in 18th was Sara Herceg-Millington, again showing her quality.  Third finisher was consistently good performer Carys Bucknall to bring the team home in 4th, just outside the medals.  Ava Allman also had an impressive run finishing only a few places further down in 23rd.  We know we are strong in this category, so the trick will be trying to build the team ethic and get these girls to the same events in future.

The only category we didn’t complete a team in was the U11 boys owing to a late injury withdrawal.  The two lads that finished were both debutants with Jimmy Taafe finishing an excellent 12th, particularly impressive for a XC debut.  Michael Quinn also ran well in finishing 34th.  We have seen some good performances over the year in this category.  The challenge is similar to that of the girls; building a team ethic and getting the boys to commit to the same events.

The race didn’t go quite so well for everyone with some not completing the course through a mixture of injury, illness and inexperience.  Hopefully they will be determined to give it another go in the future and will get a better outcome.

We had 21 finishers in total, an improvement on a well attended event last year.  One of my main aims as a coach is to increase the number of athletes the club gets involved in club competition, so I am obviously very pleased by these results.  The work that Mark Newton has been doing with the boys has made a huge difference, with a number of the impressive performances done by athletes training with him.  I can also see the difference that Emma Thackray’s enthusiasm has made in helping with the 6-7 Tuesday group, as many of the U9s have come from there. 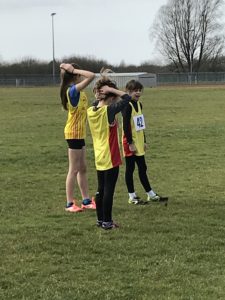 So a very promising day for the future of the club and hopefully a positive day to remember for many of the athletes that gave the race a go.  Let’s hope they come back for more!